The City of Toronto has the biggest population of any city in Canada and 4th in all of North America. It is ranked as being one of the world’s most diverse cities and is an important destination for immigrants coming to Canada. With over 25 million tourists visiting the city each year it is home to various museums, key attractions, festivals, public events and sporting activities. With the city sitting on the shores of Lake Ontario, nature is very much apart of the cities culture. Public parks to city squares to Lake Ontario, Toronto is balanced between major skyscrapers and green open spaces. 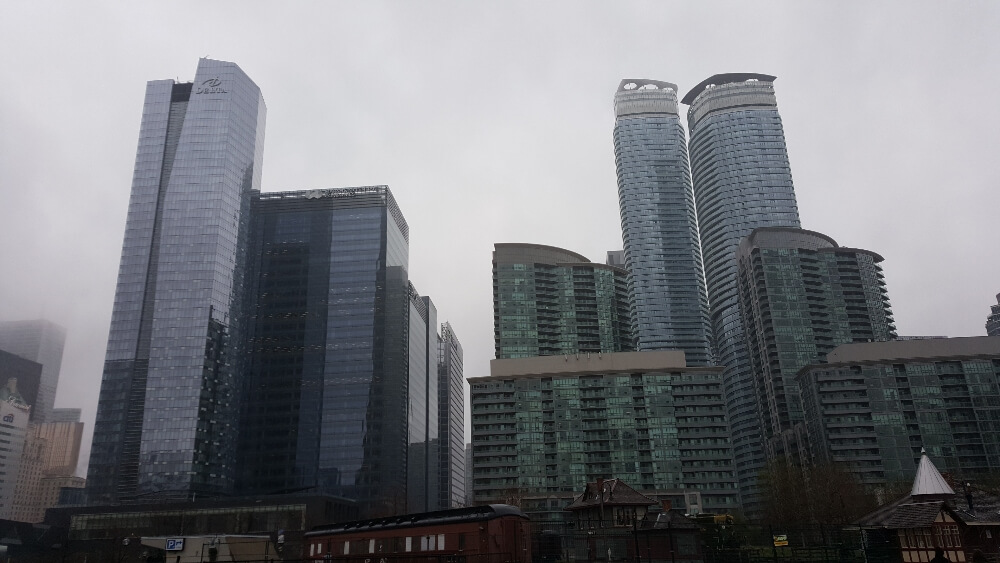 Checking out Toronto was first on the to do list with it being home to many different attractions and things to do.

Toronto’s subway system is Canada’s largest in terms of stations and the second busiest. On average 1.6 million people use the subway each weekday which is almost half the population of the whole city! It first opened in 1954 and has 4 lines with construction happening to extend the main line. During rush hour the main line (Yonge-University) can have up to 50 trains running simultaneously.

The subway was our first stop and by far the easiest way to get around the city. Buying a day pass was the cheapest option as we were unsure how many times we would be using it that day. Within minutes we had gone from Dundas St to Queen St, where we hopped off to go explore downtown Toronto. With it being a drizzly and overcast day, using the inside walkway was helpful. Popping out at the end of the walkway we found ourselves right at the bottom of the CN Tower.

Get your Subway pass here : http://www.ttc.ca/Fares_and_passes/Passes/Day_Pass/

The CN Tower in Toronto is a signature icon of Toronto’s skyline. Standing 553.33 metres tall it is the tallest free-standing structure in the Western Hemisphere. When it was completed in 1976 the communications and observation tower was the tallest in the world and held that title for 34 years. Visitors can look out over the city from 3 different levels. The top levels has a restaurant that revolves the whole building every 72 minutes. The Tower also has different light shows most nights and lights up in the colours of sporting teams when they make playoffs.

Viewing it from the bottom was an amazing sight even though most of it was lost in the clouds. We knew there would be better days in the weeks to come we decided to wait before going up to experience the view. Having also heard about the Toronto CityPASS we wanted to learn more about it and come back another time. 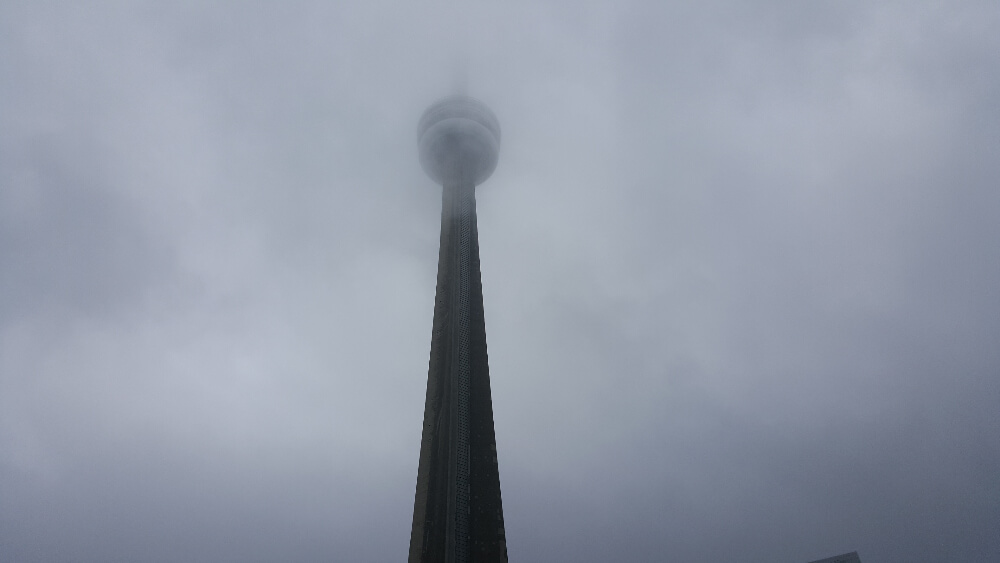 Just past the CN Tower is the Ripley’s Aquarium which is another attraction on the CityPASS. This attraction is fairly new to Toronto, having only opened late 2013. It houses 16,000 animals in nine different galleries with an interactive dive show, a moving sidewalk and a touch pool.

Definitely looking it up when we get home!

The Steam Whistle Brewery was founded by three friends. These young men lost their jobs at a microbrewery so decided to run their own brewery. They wanted to make a Pilsner that would compete with the rest of the world. So in 1998 the John St. Roundhouse became the Steam Whistle Brewery. The roundhouse used to function as a Canadian Pacific Rail steam locomotive repair facility. Today visitors can tour the building learning about the brewing process and how it was founded. The tour costs only $10 each with add ons available if you desire. While touring the brewery you also get to taste their premium Pilsner which is included in the price.

After checking out some sights we made it to the Steam Whistle Brewery. Signing up for the tour was quick and easy. Everyone chose the $10 tour while I got the $15 tour with a beer glass to take home. There was a bit of time to spare before our tour started so we got some snacks from the bar. The cheddar pretzel was delicious, as well as the buffalo chicken burger. Loved tasting the beer while we did the tour and was pretty happy with the whole experience. Would recommend anyone visiting Toronto with a love of beer to visit the Steam Whistle Brewery. 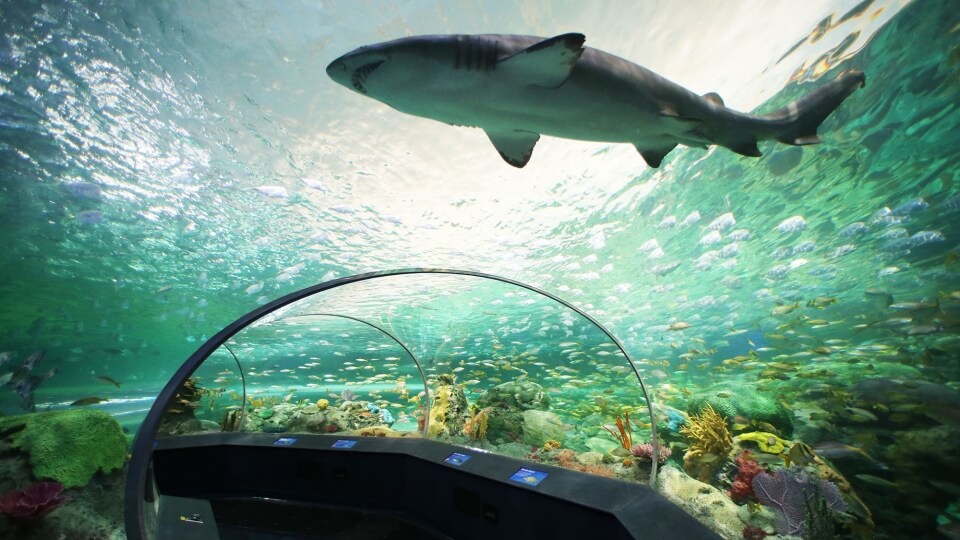 Upon exiting the brewery, the Rogers Center is foremost just off to the left. Being the home to the Toronto Blue Jays, the national Baseball team it is a formidable looking stadium. My love for sports is almost as high as my love for travel. Therefore I knew I would be following the Blue Jays throughout their season. I was even making plans to get to a game or two while I was in the area.

The Rogers Center is the first stadium to have a fully retractable motorized roof. Previously named the SkyDome, this stadium has a 348 room hotel attached to it. It is home to the Toronto Blue Jays of Major League Baseball. However, other events do take place in the stadium such as conventions, concerts and trade fairs. The stadium was built due to fans being unhappy with the old stadium when the weather was less than ideal. The roof which takes 20 minutes to open or close meant that weather conditions wouldn’t affect events and games from occurring.

The Air Canada Center, which is a stones throw away, is home to both basketball and hockey. The Toronto Raptors of the National Basketball Association and the Toronto Maple Leafs of the National Hockey League. It is connected to Toronto’s Union Station (subway) and is a stadium that is continually revolutionizing its features.

After wandering the streets back into downtown we decided to grab an early dinner at a quirky restaurant. Poutine was on the menu and my first taste of this very Canadian meal was delicious. For those who don’t know what it is, it’s fries with cheese curd and gravy.

After looking up the CityPASS it is a definite must have if visiting Toronto and wanting to see the main attractions. There is also City Passes for 11 American cities if heading State side. The CityPASS includes admission to the CN Tower, Casa Loma, Royal Ontario Museum, Ripley’s Aquarium and either Toronto Zoo or the Ontario Science Center. The CityPASS has these admissions all bundled up and delivered to you for a price that saves you 43%. The Pass is valid for 6 months from purchase, until the first use, from which you have 9 days.

Get your pass cheaper here : http://www.citypass.com/toronto