There is no doubt that New Zealand boasts some of the most epic and mind-blowing natural landscapes on the planet. People travel from all around the world to see the harmless rainforests and endless mountain ranges through their own eyes. Already a magnet for tourism, the addition of a few feature films such as Lord of the rings has only but reinforced the fact that New Zealand is undeniably one the most beautiful landscapes in the world.

When you grow up in such a place you tend to take it for granted, it is all you know. It is not until you step outside of the only world you have ever known that you get a true sense of gratitude. Not only for the country that you grew up in but also for the very district I call home.

When I travel, stay at hostels and talk with people from all around the world one of the most common questions I got asked was ‘why did you leave?’.

Most people could not comprehend why on earth I would want to leave New Zealand. On contrary to that statement fellow travellers would generally start listing their favourite locations and activities during their time in New Zealand. Most of the time I would say I have not done that, much to their disbelief. Even though it was in my own backyard.

It was repeated conversations like this that sparked a pact with myself that whenever I was back home I would get out and explore the epicenes that people would travel halfway around the world to see and experience.

On one occasion a fellow traveller who had just come off a 6-week campervan mission throughout New Zealand said to me.

‘Have you been to Waipunga Falls? it is the best waterfall in the North Island man!’

A familiar response from myself in these situations was that of ‘Nah I haven’t, where is it?’

I grew up 30 minutes away from supposedly the best waterfall in the North Island of New Zealand, yet I had no idea. Of Couse It on my New Zealand Bucket list. 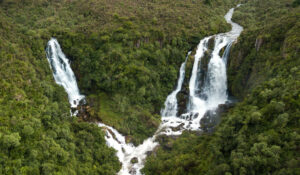 Where Exactly is it?

Waipunga falls is located approximately 30mins East of Taupo, on the Napier-Taupo Road (State Highway 5). A road that I have driven many times and simply had no idea it was nestled right there literally on the side of the road.

After you drive through the flat open plains of forestry and farms you will pass the Rangitiki Tavern which will be on your right-hand side (coming from the Taupo direction). Just as the road changes from long open straights to windy corners and Native forest you will see a ‘Scenic Lookout’ Sign on your left-hand side.

Follow the turn off for only a couple of hundred meters and you will come to a carpark area that will look out over the falls. Yep, it is that simple and it was there the whole time only a few hundred meters off the main highway is one of the most epic waterfalls ever.

Waipunga falls consists of two 40m multi-tiered waterfalls converging into the Waipunga river. The raw energy and beauty they produce is hard to capture in a single photo and is something you need to experience yourself. 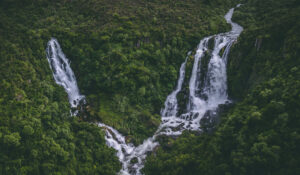 The best view of the falls can simply be viewed from the carpark, no walking or hiking required. It’s literally the drive-thru of Waterfalls. There is no tracks or access to the base of the waterfalls itself.

Me being my adventurous self I planned to find a way to the bottom, or at least to a different vantage point but decided against it for two reasons.

The bush is ridiculously thick with rocky cliffs, and to be honest the best view is from the carpark (never thought I would use those words together in a sentence) The risk for the reward to climb to the bottom is simply not there.

So, was my foreign friend right in saying that Waipunga falls is the best waterfall in the North Island of New Zealand? I think that is up for debate, but it is most defiantly up there. Go and check it out for yourself, would love to know your thoughts.