After a 5 hour flight from Hong Kong we arrived at the International Airport of Sri Lanka around midnight local time. With minimal research on where to go or what to do we were essentially winging it to start with. Being such an unreasonable hour it probably wasn’t the best time to arrive. After a few conversations with other tourists and some hustling locals, it didn’t take long to get pointed in one direction. That direction was to Negombo for some much needed sleep then south to check out some beaches.

After touching down and exiting the plane we made our way through customs and onto the baggage area. 90 day Visas can be obtained easily online which makes for smooth sailing. With stamps in our passports and bags on our back we headed to the exit.

The hustle was instant. Being a westerner you are quickly targeted by local taxi drivers. All whom have a ‘friend’ with a guest house. Just looking for an easy option after a 40 hour haul from New Zealand our bartering was minimal. We settled for a taxi fare to Negombo for 1500 rupee and a night a guest house for 2500 rupee. Once the deal was settled it was a 15 minute taxi ride to our destination. A bed has never felt so good.

An area where many tourists tend to stay immediately before departing or after arriving in Sri Lanka. It’s close proximity to the Airport is around 15 minutes depending on where you stay. It is a major city with a population of around 130,000. It is known for its fishing industry and sandy beaches. We checked out the beaches and they were not the greatest. Pollution both in the water and on the beaches itself didn’t make for an amazing vibe.

From our guest house, in the morning, we flagged down a Tuk Tuk to the bus station. Here we caught a very crammed, hot and rundown bus to Colombo which took the best part of an hour. Roads are not the best while traffic management or ‘road rules’ don’t really exist. It was a fun experience and a good first taste of what to expect.

Dropped at the bus station in the middle of the bustling city. Colombo is the Capital of Sri Lanka. From the bus station we were pointed in the direction of the train station. All senses get a workout when you are walking around somewhere like the center of Colombo. Weaving through the crowd of locals as we passed by markets, beggars and raw sewage. When you come to a road be sure to check twice before you cross. There is no consistent flow of traffic, you have to pick your timing and go for it. Otherwise wait for a crowd of locals to build and the traffic will halt briefly. The walk took around 15 minutes.

Once at the train station, tickets can be brought with ease at the counter. Reference your train number with the platform on the board or ask some locals. It is really common for tourists to catch the wrong train. Heading to Unawatuna, a banana shaped beach popular with tourists, it was easy to know which train was ours. It seemed to be the one which had the most westerners. 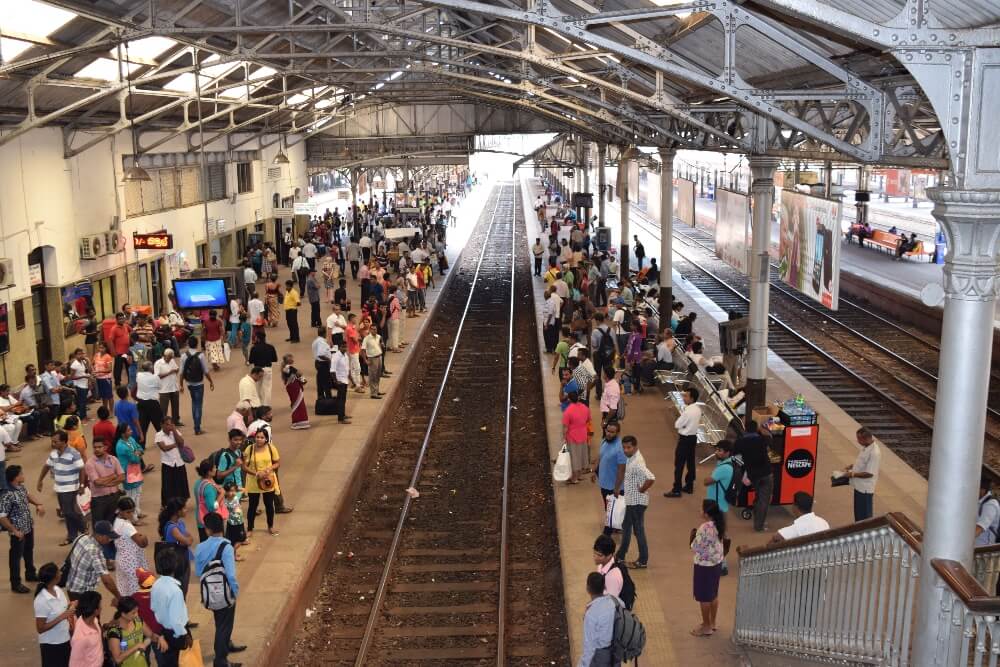 Packed in like sardines, it was standing room only once the train had reached Colombo. The journey was to be approximately 3 hours. Once out of the city the tracks follow the coast as it heads south. Your mind is quickly distracted, from the discomfort to the beauty of the journey itself. To one side you have the ocean and sandy beaches. You can see fishermen trying to earn a living, palm trees scattered as far as the eye can see and golden sandy beaches around every turn. To the other, villages where you catch a glimpse of everyday life for a Sri Lankan. Groups of kids are playing cricket or running alongside the train with smiles on their face.

The train stops every half hour or so and slowly becomes less populated. As you do traveling, time is also passed by chatting to people from around the globe. Chatting helps you pick up recommendations for places to stay and things to do. Once we arrived at our destination, there was Tuk Tuk drivers looking for service and took us to find a guest house.

Here is all the information you need for the trains in Sri Lanka: http://www.railway.gov.lk/web/

Within the first 24 hours of being in Sri Lanka I had experienced many things for the first time. From Tuk Tuk rides to the chaos of a Colombo and everything in between. It was so much fun! By far the best experience would have been leaning out the train for the first time. Holding onto the rail as I took in the fresh ocean breeze, it will be something I will never forget.