Golden sand beaches lined with palm trees, resorts and multiple story hotels is not what I expected in Vietnam. However, Vietnam’s Nha Trang feels as though you are in a tropical paradise somewhere on Australia’s East coast.

That is until you check into your accommodation, begin to explore and the outward appearance gets somewhat tainted. 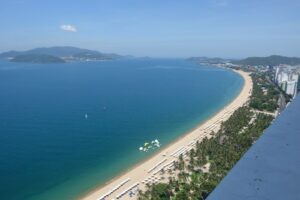 First let me get something straight here, this beach is beautiful enough to be one of the world’s top beaches! Even if the water isn’t the cleanest the beach is incredible. The only thing is the company that is drawn as a backpacker. As a young 24-year-old backpacker you are accustomed to arriving at places and staying with like-minded people from all over the world, engaging in conversations and feeling an instant connection.

Unfortunately, this is not the case with Nha Trang.

Not to categorize any nationality into a stereotype but the common tourists here are Russians and Chinese. From my experience travelling around the world for a couple of years, they come across as the two nationality’s who tend to segregate themselves from everyone else. 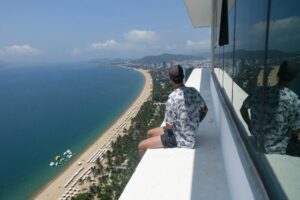 Even in Nha Trang this was no exception. Walking out onto the street, eating out at local restaurants even hanging out on the beach I would try and converse or even just smile to no avail. Which was unfortunate as the beach was so amazing. It really gave the place a bad vibe and in turn made me leave sooner rather than later.

During the morning, the Chinese would swarm the beach. Yet as soon as the sun comes out they would go into hiding to keep their whiteness (being whiter gives you higher social status in a lot of Asian countries). Then the Russians would come out for the remainder of the day until sunset, when the Chinese would return. Although I spent some time at the beach it was not enjoyable nor was anywhere else in Nha Trang. 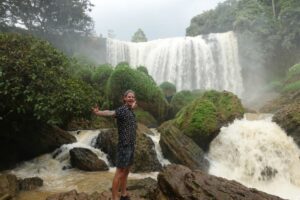 I’m writing this post to advise you as a backpacker to skip this place as myself and numerous backpackers I talked to thereafter had the same feelings.

After a quicker than expected stop in Nha Trang, it was time to move to the Southern mountain city of Dalat. Only 3 hours away winding our way through the mountains on the bus. Dalat is no town, its most defiantly a city, and a lot bigger than I first thought it was. 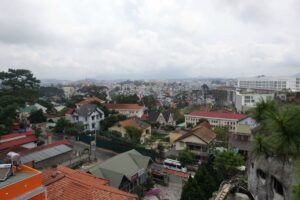 This city is home to the art made by the famous Vietnamese artist Đặng Việt Nga. I had no idea but it turns out that the arty vibe is common in Dalat. 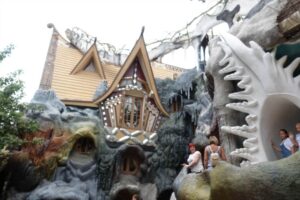 Firstly, there was a maze bar which is multiple stories high and seems never ending. You grab a drink at the bar and then proceed to walk around the establishment. You pretty much get lost and stumble across random bars and places to drink. It’s unlike anything I have ever seen, such a cool experience.

Secondly, was the haunted house which doubles up as hotel and massive tourist attraction. The artist had a wild mind and decided to make these crazy structures with new ones continually getting built. 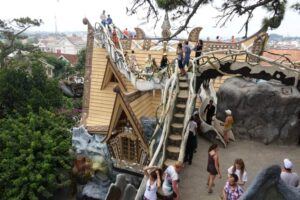 The main reason why I came to this part of Vietnam was for the epic waterfalls. Only a quick hour and a half scooter ride away from the main area of Dalat.

On the way, you can stop off at the weasel café. Here weasels are feed coffees beans, they then excrete them out yet the coffee bean remains intact. The beans are then used to make coffee at the cafe (after being cleaned I hope). It was cool to see although the conditions in which the animals are being kept in are quite cruel. Pretty much just metal cages, not a real home. In the western world these conditions would not be accepted. 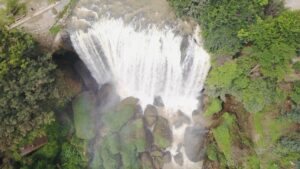 The first waterfall on the stop is Elephant Waterfall. There is a viewing point at the top where you can watch the water flow over the drop off, with a sketchy path down to the base of the waterfall.

It was a sketchy walk, be prepared to get covered in mud and focus. When we were down there a tourist slipped and fell into the raging river. Luckily, he popped up and could swim to the side. A very intense experience as you can see and feel the full force of the waterfall with the danger it poses. The tourist was very lucky. 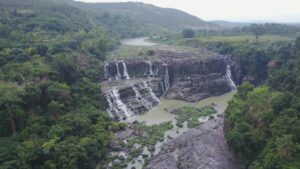 Driving for a further hour is the second waterfall, Thác Pongour which is much bigger but a lot less intense. You park your scooter at the top and walk down to the base of the waterfall. The path leads you through the typical South East Asian sales funnel of food and souvenir stores. Once you reach the bottom you cross a little wooden bridge bringing you to the beautiful waterfall. There is room to relax or walk around and take it all in.

After a long drive home to Dalat it was time to catch a bus to Ho Chi Minh city.Unfortunately, I did not have time to explore Ho Chi Minh city. I was only there for a few hours before I had to head to the Airport and catch a flight to Thailand.

People always use to rave about Vietnam and I never really got it.

I went in with low expectations and for many reasons left with it being one of my favourite countries I have traveled through. If you are sitting on the fence about visiting this beautiful country don’t, buy a ticket and experience the beauty for yourself.