Winding through gravel roads, en route to the Himalayas, carved into the side of sheer rock faces. Following a river valley we made our way to the next destination aboard yet another over packed bus. When it seems the bus is not going to make it around the next corner let alone a 6 hour journey. Stopping for lunch at a midway point, a buffet is awaiting us. Traditional Nepalese food is spread over multiple dishes. We load our plates with caution, who knows how long it had been sitting there and what bacteria had the chance to breed upon it.

Arriving in Pokhara to a group of hustling locals swarming us as we exited the bus was nothing out of the ordinary coming from India. Although there was a degree of seriousness, an underlying sense of humor made for great banter and riffling laughter. Having already pre-sussed accommodation from someone we meet in Chitwan, we grabbed a taxi and got on our way. The beautiful town is located at the foot of the Himalayas. 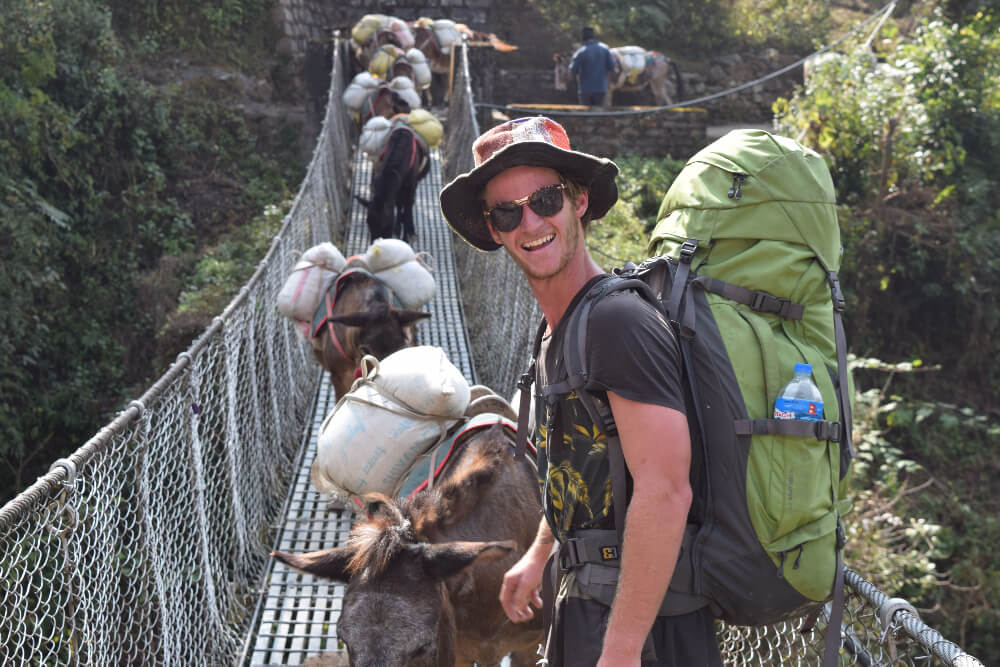 Immediately we were in love with the picturesque town. Set on the shores of a lake that then backs onto the Himalayas, Pokhara gave off an amazing vibe. Easily the cleanest town we had come across on our travels through Central Asia, full of tourists and endless restaurants. Steak was on the menu and was the first thing we ordered!

Why Pokhara?  A tourist hub full of activities including being the starting base for Mt. Annapurna, with a base camp trek that we wanted to summit. Via Poon Hill the trek was looking at taking 7-10 days. The previous fortnight we were riding camels in a dessert so we didn’t have the gear to go mountain climbing. Luckily you can hire all the gear you need at one of the local stores spread down the main street, along with permits to enter the National Park. 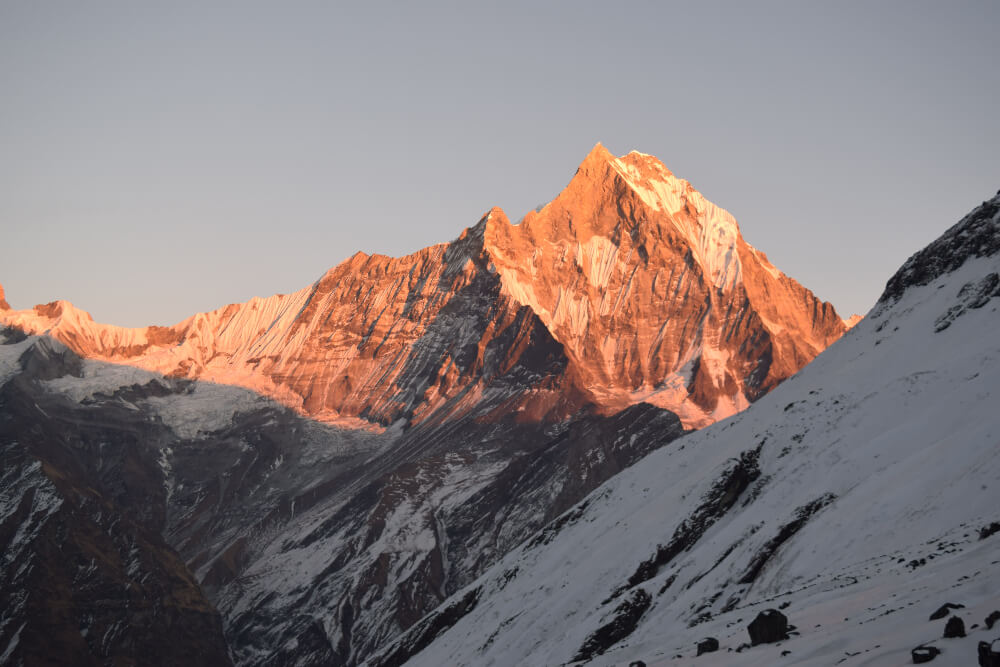 Welcome to the Himalayas

Day 1- 6AM start, with a taxi waiting outside our guest house we load up and head to the starting point of Nayapul. Here we ate a hearty meal and set off on what would be at least 7 days of trekking through the Himalayas. The first few hours was easy going with gradual gradients. We passed through farms and local villages, a sight that was to be constant throughout the journey. We reached a set of stairs near Tikethunga that quickly determined how fit we were. Let’s say it blew the cobwebs out and once we reached the top it was time to pick a place to stay for the night.

Day 2- The next morning we had a goal of reaching a place called Gohkapur. The walk was a lot easier than expected, only taking a few hours. Passing across a couple of streams and by some more villages it was a pleasant walk. Being at the base of Poon hill we set off in the evening only to find it was foggy and didn’t offer the view we were after.

We woke up an hour before sunrise to catch the un-obstructed view of the Himalayas. It was like something out of a National Geographic magazine. A 180 degree panorama of the mountain range we were about to climb. Taking in the scenery for an hour we decided to descend and push on to what was going to be a big day. We went up vertical hills and down shaded valleys where snow turned to ice along the path. Slipping and sliding we come out to Tadapani, a basin full of eagles soaring in the wind. Reaching our destination of Chhomrung just before nightfall.

Day 4- Trying to do the trek in 7 days so we had enough breathing space to catch a plane in Kathmandu, we pressed on early in the morning with another big day in mind. From here right to the base camp was all uphill. The map showed massive increments in altitude change from check point to check point. Our goal was to reach Dobhan, which we did, with a stop for lunch in Bamboo. 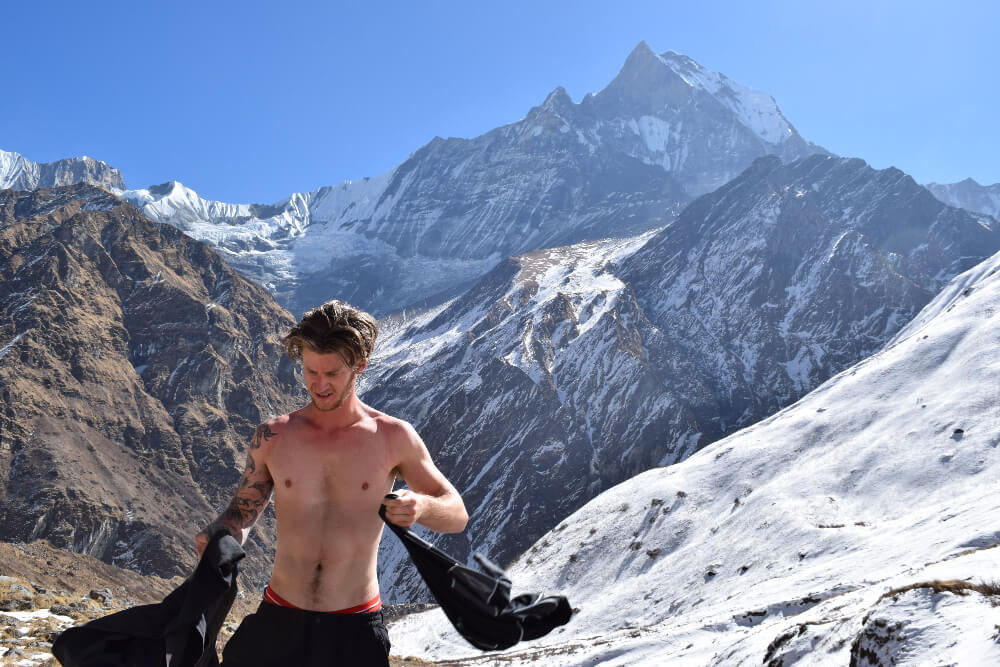 The final push was base camp. After spending the night with minor symptoms of altitude sickness we knew to take this day slowly. The sights were the best I have seen, walking in-between glaciers and massive mountains capped with snow. We took our time, kept ourselves hydrated and stopped every so often to acclimatize. The day was perfect, no wind nor rain, the sky blue and when we reached base camp the view was well worth the 5 day climb. A full 360 degree view sitting in the heart of the Himalayas, the size and scale was crazy. Mother Nature made me feel insufficient sitting up there.

Day 6 & 7- The descent. Some people like going down, not me. The thrill of a downhill is always short lived. After spending a week in the mountains eating the same food over and over again. Just the thought of getting back to Pokhara and choosing from a number of restaurants was so appealing we were running. Stopping for the night, we chose to bypass the hot springs we had heard so much hype about. Reaching the end of the trail we hitched a ride with a taxi back to Pokhara.

You can check out my video HERE

With a flight in Kathmandu in a couple of days’ time. we relaxed and did some souvenir shopping for family and friends. Being the end of my trip through central Asia it had gone quick but had been an absolute blast. Back home to New Zealand!! 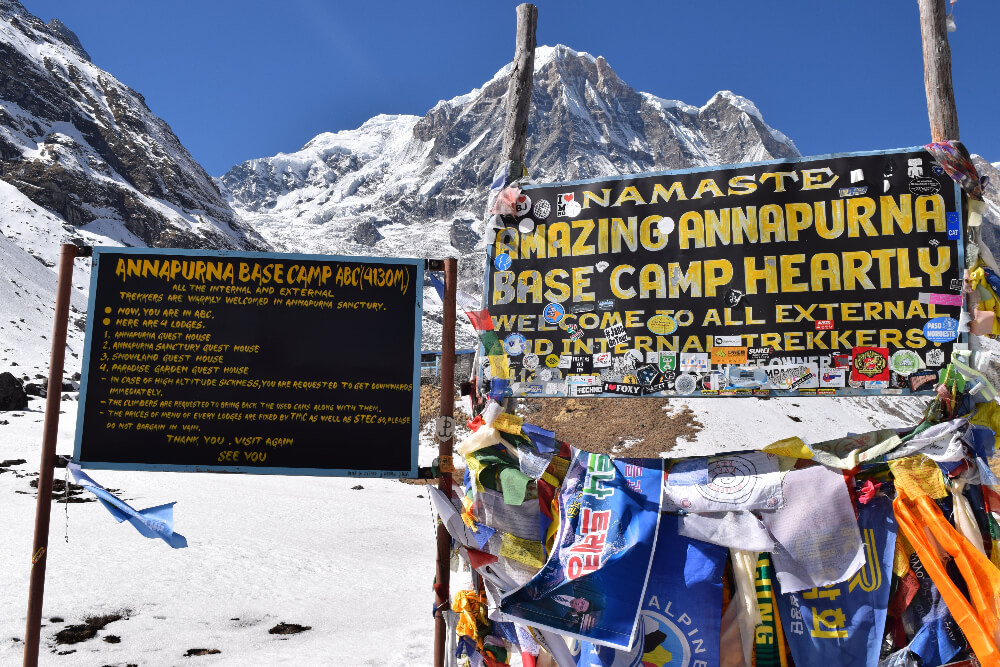