Arriving into a new country at 3 am its hard to get a first impression especially when it is pouring down with rain. So my first experience of Hanoi, Vietnam was a bit of a downer. The short flight on Cebu Pacific from Manila offered only the basics and mediocre late-night amenities. The flight was not the most relaxing early morning flight I’ve ever had. Although sitting next to France’s number one wind surfer, who attended the Rio Olympics, made for interesting conversation. Average flight aside, Hanoi and a new country were on the horizon.

Staying at Hanoi’s Downtown backpacker hostel, located in the heart of the old quarter was about 40 mins from the Airport. Asking a few people on the plane what the cost of transportation is, I had a rough figure of about $20USD. After collecting my bags I found a random guy at the airport (as you do in Asia), he offered me a ride for under the price I had been told.  He was honest and funny but be careful, some people like this tend to take you for a ‘ride’ when you are fresh out of the departure lounge. 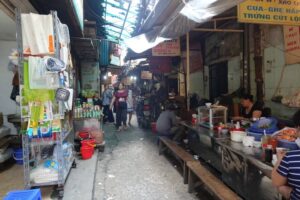 The 40 min journey from the Airport to the hostel cost about 400,000 Dong. This price would be relative to anywhere within the old quarter, no matter where you are staying.

Checking in at 3 am the only thing you want to do is sleep. After a night/morning of international travel you feel drained. So taking it easy is exactly what I did for most of the day.  After feeling refreshed late afternoon, I do what I always do in the heart of a new city and decided to go and explore.

First thoughts, walking out into the streets of Hanoi, was everything is quite overwhelming. Scooters are passing by every second, there are people and food stalls everywhere. I have been travelling throughout Asia for the best part of 12 months, but even the center of Hanoi had a heightened sense of intenseness. I love it. First things first, the food. Coming from the Philippines it was refreshing, almost a heaven like feeling to see street food. Something that is minimal in the Philippines. So naturally, that was the first thing I did, got some street food! Then some more…. and some more. 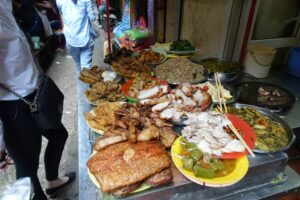 There are multiple things you can do in the Old Quarter. During my stay there I confined myself to this area as I did not feel the need to explore any further. Depending what your traveling purpose is, the old quarter will cater t your needs. Whether it’s walking tours through the streets stopping off at the historic areas, having a few too many beers at the countless bars or grabbing your own map and wandering around the city at your own pace. Hanoi has it all. 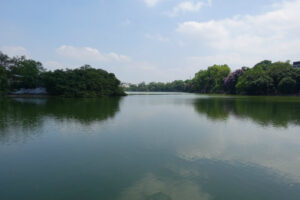 Hoan Kiem Lake, also known as Hồ Gươm, is a lake in the historical center of Hanoi, the capital of Vietnam. Located in the middle of the city which provides a good centralized point to get your bearings. It is also a refreshing place to go for a walk providing good vibes and quality entertainment for arriving tourists and locals. The lake is not big and only takes around 20-30 mins to walk around. It offers a calming feeling, with seats and tranquil gardens located around its edge, the perfect place to park up and chill for an afternoon. Coffee shops, bars and restaurants alike line the lake. If you are inclined to quench your thirst while you are strolling around there really is no better place to do it.

It’s also a popular social environment for the locals, young and old. Younger teens gather to play with a football or a hackie sack. I have never seen anything like it, it’s like a stick with a feather on the end weighing it down, they are extremely talented with it. The older generation tends to use the lake area to exercise, practice Tai Chi and meditate which gives it a very calming effect. 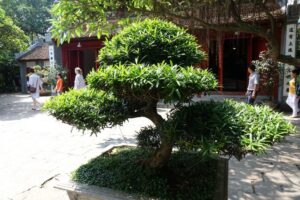 On the Northern side of the lake is turtle island which can be accessed by a little bridge.  On the island is a little temple surrounded by ancient Bonsai trees. The temple contains the typical religious shines, figures and gives off the positive energy that they so often do.  There is also something unique, a reason behind the ‘turtle island’ name. It is home to a very large dead turtle which used to live in the lake until a few years ago. For decades, this turtle use to call the lake home, the species even goes back in the city’s history.

Unfortunately, this was the last turtle of its kind and when it passed away the city went into mourning. They then dedicated the entire island to the turtles. It’s got an extremely peaceful and perfect area to just hang out for an hour and take in the vibes. 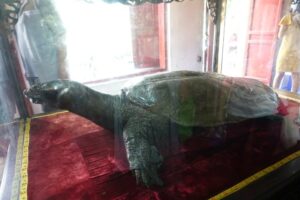 Hanoi boasts a crazy night life, walking down the streets at night you can see its rather rampant in the old quarter. Hanoi’s Downtown backpackers seems to be the backpacker’s hub to party. So, take this as a warning, if you plan to stay here, expect to party…a lot. Downtown backpackers have themed nights every night, free beer and shots throughout the night. Everyone goes off one way or another and is followed by a pub crawl around 11 pm which takes you to numerous night clubs throughout the city. By the end of the crawl, you have completely lost all bearings.

Even directly outside the backpackers is local ladies with kegs and little plastic stalls selling extremely cheap beer in cups. When I say cheap, I mean about 50 cents a cup. Whatever a good night out means to you, it’s not hard to find an enjoyable time and people to share it with. 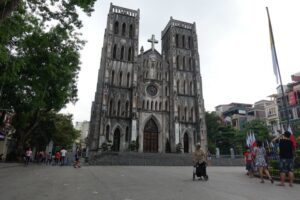 On Sunday I was there, and quite frequently throughout weekends, they close off most of the streets around the lake. During the evening live music, families and sports games begin to pop out of nowhere and litter the surrounding streets of the lake. I walked around for a couple of hours with the biggest smile on my face and couldn’t help but wish more cities around the world would adopt habits like this. It’s a good environment where everyone appears to be smiling and having a good time. 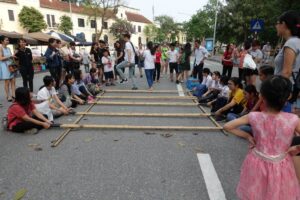 Hanoi is also a perfect place to base yourself as you explore the North and Eastern tourist hot spots of Halong Bay and Sapa as it I quote centralized. Booking my Halong bay trip through Vietnam Downtown backpackers hostel was simple and you can read about the experience here. When I came back to Hanoi for a further couple of days, I ended up booking a bus to Sapa (through the hostel as well). Read about my Sapa experience here. It was time to come back to Hanoi once more after Sapa before I proceeded to head south, yet again.

Not only is Hanoi an extremely fun city to spend a few days it is also the perfect hub for the north of Vietnam for more than one reason. If Hanoi is not on your bucket list, add it now.

For a visual experience of the city watch my Vietnam video here.