Considered to some, the 8th wonder of the world it is no surprise that Halong Bay comes up in almost every conversation. From conversations with fellow backpackers traveling through Vietnam one particular tour Castaways was highly mentioned.

Halong Bay is largely regarded as one of the must do’s for Vietnam. From what I had seen previous to arriving it doesn’t take long to work out why. Large Limestone islands rising out of the water as far as the eye can see, with there own private white beaches.

Arriving in Hanoi I knew Halong bay was on my list of ‘Must Do’s but I did no previous research whatsoever on Halong bay itself.

I find getting to a hostel and talking with fellow travelers tends to give you the best indication of what to expect. This time turned out to be a valuable hunch, as I had one of the best 3 days of my life. 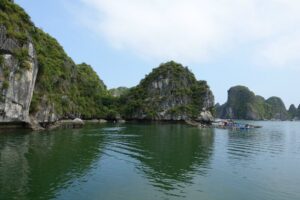 There are literally hundreds of local tour companies offering you multiple different options to get out to Halong Bay. You name it and it will be possible. 1-night tour, 2-night tour, 3-night tour… fast boat, slow boat, endless options. There are always options for you to get a bus out to the coast and organise your own sort of tour from the likes of Cat Ba Island. However I wouldn’t recommend that option, here’s why.

I not usually one for tours, I’m the kind of traveler who likes to do everything myself. I get the impression that when you do a tour, you are; firstly, paying more than you need to for what you get, and secondly, you are limited to freedom. Most of the time you are on an agenda, dictated by the tour to what you can do.

That was my opinion until I had been staying at Downtown backpackers for a couple of nights and the subject of Castaways keep coming up in conversation. Every morning a group of 50 backpackers would roll out the door, off to Halong Bay. Every night a group of 50 would roll back in looking a little bit worse for wear. After multiple conversations with these people coming back from ‘Castaways’, I was sold. I booked the ticket and it was the best decision ever. 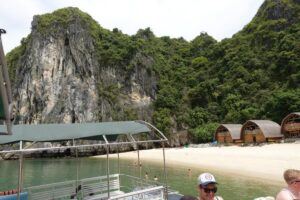 Initially booking the tour you are naturally taken back by the price, being a backpacker, you are always looking to save money where you can. The price was $220 USD for a 3-day, 2-night tour to Halong Bay. The door to door service from the hostel. After diving in and asking what you get for your money I was finally sold and booked it for the next morning.

Once you arrive in Halong Bay itself you get your own secluded island, just for you and the 50 or so backpackers you are doing the tour with. Tropical bungalow style huts on your secluded beach. All food inclusive and cooked for you.

The only negative I could say about this tour is the fact that you must pay for your own alcohol, where as some other tours are all inclusive. But that is minor, when you see how much alcohol is consumed on the trip you can see why they do not want to be paying for it.

Once the half day of travel is over, the first-day activities can begin. These include Rock-climbing, Wake boarding and tubing. There is also beach volleyball, Frisbee and enough spare time to just chill out on the beach for some swimming if you are that way inclined. 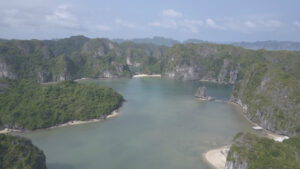 Late afternoon sees another group of 50 or so backpackers arrive from the day cruise (day 2 activity). They have been drinking all day and are in full party mode.

Dinner is served almost instantly and then the whole island turns into a party central. 100 plus backpackers all out to have an enjoyable time, consume crazy amounts of alcohol and party long into the night with your own DJ dropping both fresh and classic tunes.

The second morning everyone wakes up, and its clear to see it was a big night. However morale is high as its time for the ‘booze cruise’.

A quick breakfast and a few shotguns later everyone is on point and ready to party by 10am. Everyone loads onto the boat and the beers start flowing. While drinking, dancing and throwing around general banter the boat cruises to the first stop. 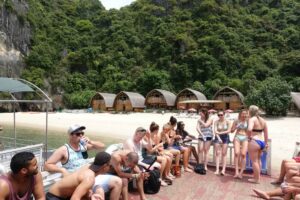 The first stop of the day is a lagoon like area. We all loaded up with beers and jumped on some kayaks. Cruising around for a couple of hours through a beautiful lagoon lined with vertical limestone cliffs, caves and of course multiple drinking games.

The next leg of the of the journey includes lunch as you cruise along to a little sandbar island. Here the boat parks up for a couple of hours.

You can jump off the boat as much as you want, swim out to the sandbar and chill out or simply relax on the boat, it’s up to you. By this point of the day however, everyone is in full party mode and the vibes are strong. 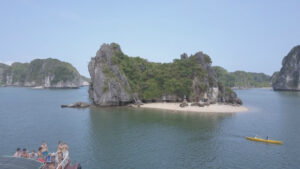 By 4 – 5pm you are back to the main island where another 50 fresh backpackers have arrived from Hanoi. Everyone is ready to party just as we were the night before. The night repeats itself as dinner rolls around, then it’s time to party all night again.

The fresh group brings life and energy, it was one of the funnest parties I’ve had in a long time. It’s just funny that it was in the middle of paradise, a truly epic experience.

Getting Away from the Crowds

Something I would recommend doing either on the first or second day is grabbing some kayaks (free). Launch them out into Halong Bay and go for your own little booze cruise with a couple of buddies. Just kayaking around the Castaway island, itself, is something epic to do.

There are floating villages, where local communities live on floating homes and literally live off the ocean. They even have dogs and all the amenities a usual household generally has.

It was unlike anything I had seen before.

Working your way around the island is an experience I will never forget. You can get up close and personal with the giant limestone cliffs! Even shot-gun a few beers with some like-minded buddies who live on the opposite side of the world from you. 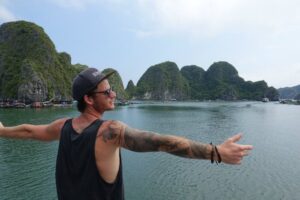 Wrapping up the trip

The next morning was a little rough, two straight days of partying can take its toll.

I tend to look back at how epic it was and smile my way through hangovers like this. It was more than worth it! After countless litres of water, a classic big breakfast it was time to start the long haul back to Hanoi.

Again, with the ferry, bus, ferry, bus that would have been a logistical nightmare after a couple of days partying. Arriving back in Hanoi as one of those groups that I was looking at all those days before. There is only one thing on your mind and that’s sleep. But damn it was well worth it.

Being my first ‘tour’ I have done I was extremely satisfied. I would highly recommend it to anyone looking to have an enjoyable time in Halong Bay. 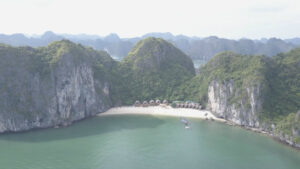 I would highly recommend this trip, if you want first-hand the experience, check out my video on YouTube here.