After 3 months spent on the Eastern side of Canada, it was time to cross the border and explore the United States of America and cities like Detroit. The border crossing from Ontario into Michigan was the easiest crossing I have been involved in throughout all my travels across the world. I had entered the States before, so with my details already being on the data base, I just handed my passport over and was on my way within 5 minutes. The customs officer had recently been to New Zealand which helped with the whole situation.

Central Michigan was our destination, to stay with some family friends. They lived just out of the capital Lansing. This would be our home for the next couple of months as we put our worldwide travels on hold for a while. After 9 months of solid travel, we decided to experience the American way of life first hand. 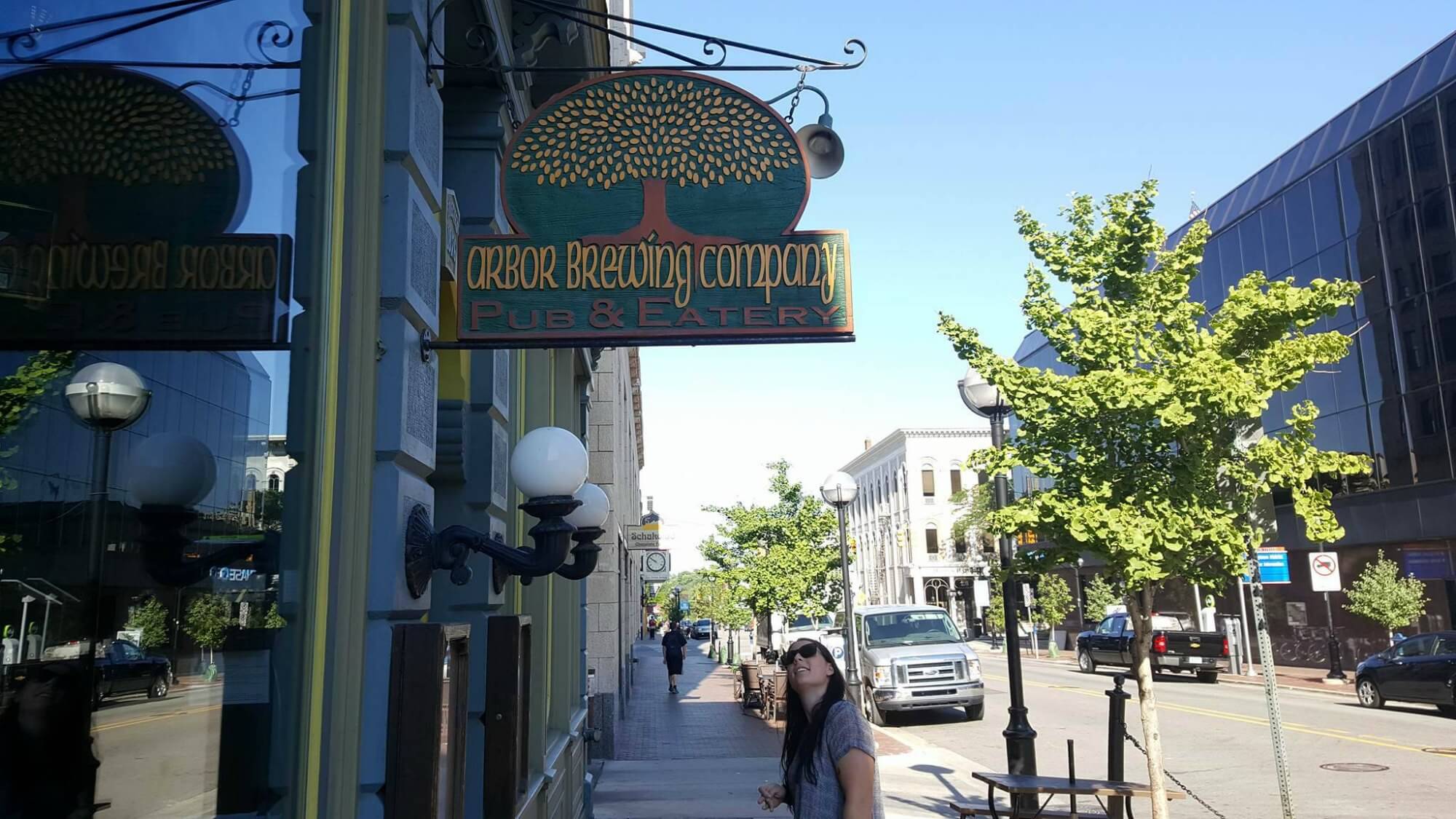 Our location is beautiful, a 15 acre property surrounded by wilderness where animals roam freely within the backyard. Wanting to explore the surrounding area we decided to head to Detroit for the day and due to my birthday being that week, we thought that would make a pretty sweet day.

Jumping into our rice burner of a rental car bright and early we set off first to Ann Arbor. Ann Arbor is a quirky little University town on the way to Detroit. By University town, I mean during the summer it’s a quiet town, then when the semester rolls around thousands of students flood the town. The population increases dramatically.

We spent a couple hours checking out the down town area. We got a bite to eat and wandered around the University of Michigan. The campus was huge! A lot bigger than anything in New Zealand, but I guess that’s America. Bigger the better.

Then it was time to make our way to Detroit. I had a preconceived idea about the city so was interested to see what it had to offer. 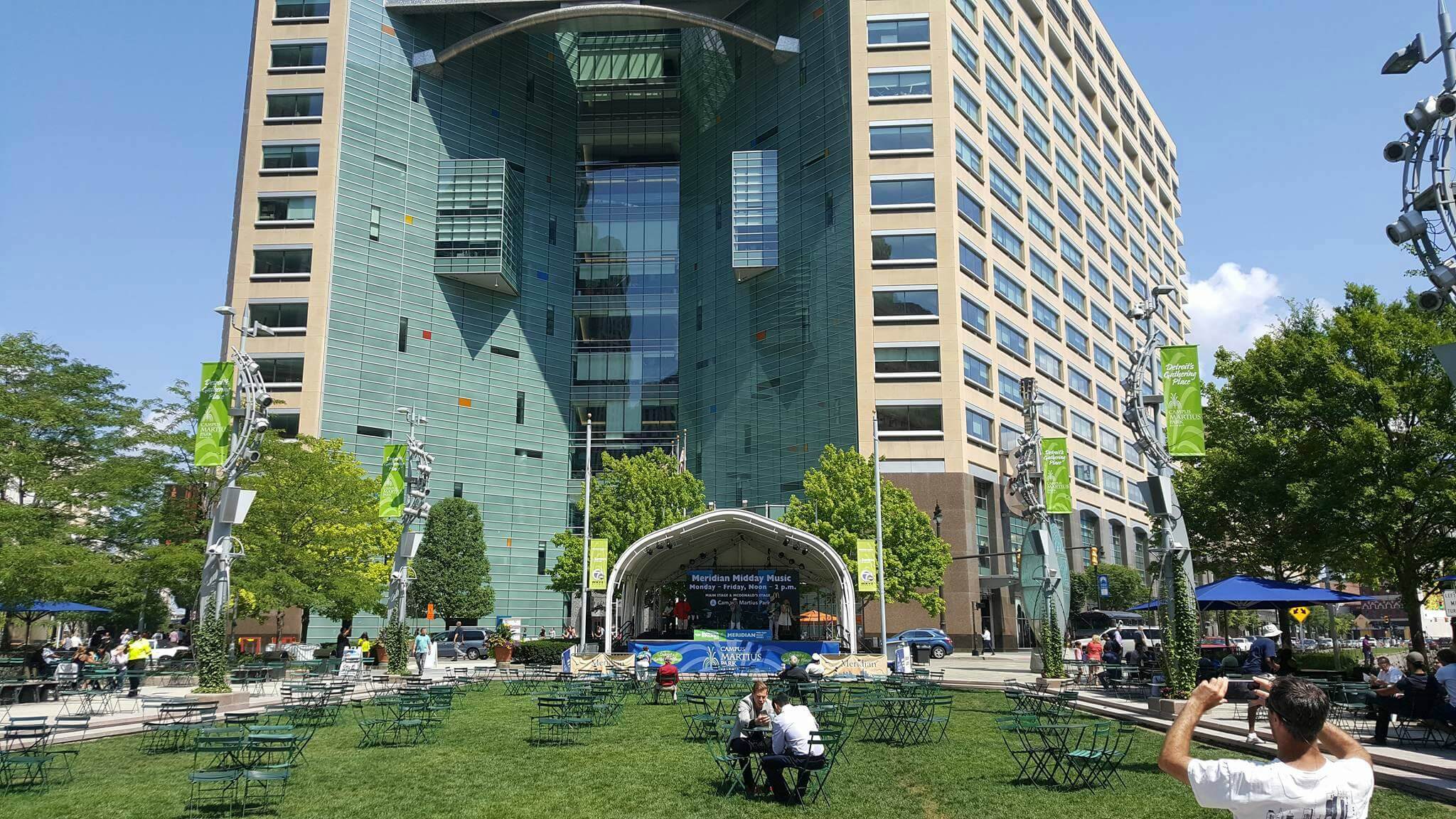 To me Detroit has always had this image in my head of being a run down, gang and violence ridden place. The city was built around a motoring industry, so for some reason I imagined a rusty old city.

What I saw surprised me…

Driving into downtown Detroit I witnessed a beautiful city with amazing sights to see.

Cadillac square, Detroit River, GM headquarters, and the Spirit of Detroit were among the activities we had in mind throughout the day!

Cadillac Square is must see if your visiting Detroit anytime of the year. Campus Martius Park is a large park in Cadillac Square which is perfect to hang out in the warmer months. It hosts live music throughout the day, accompanied with a beach theme restaurant/bar for meals and drinks.

Just across the road you can find a street-food market during the midday hours, with plenty of different food choices for any taste. Nights can be an excellent time to check out the park as well. Quite often there are events being held, mostly live music by different Detroit bands and singers.

The vibe here was amazing!! 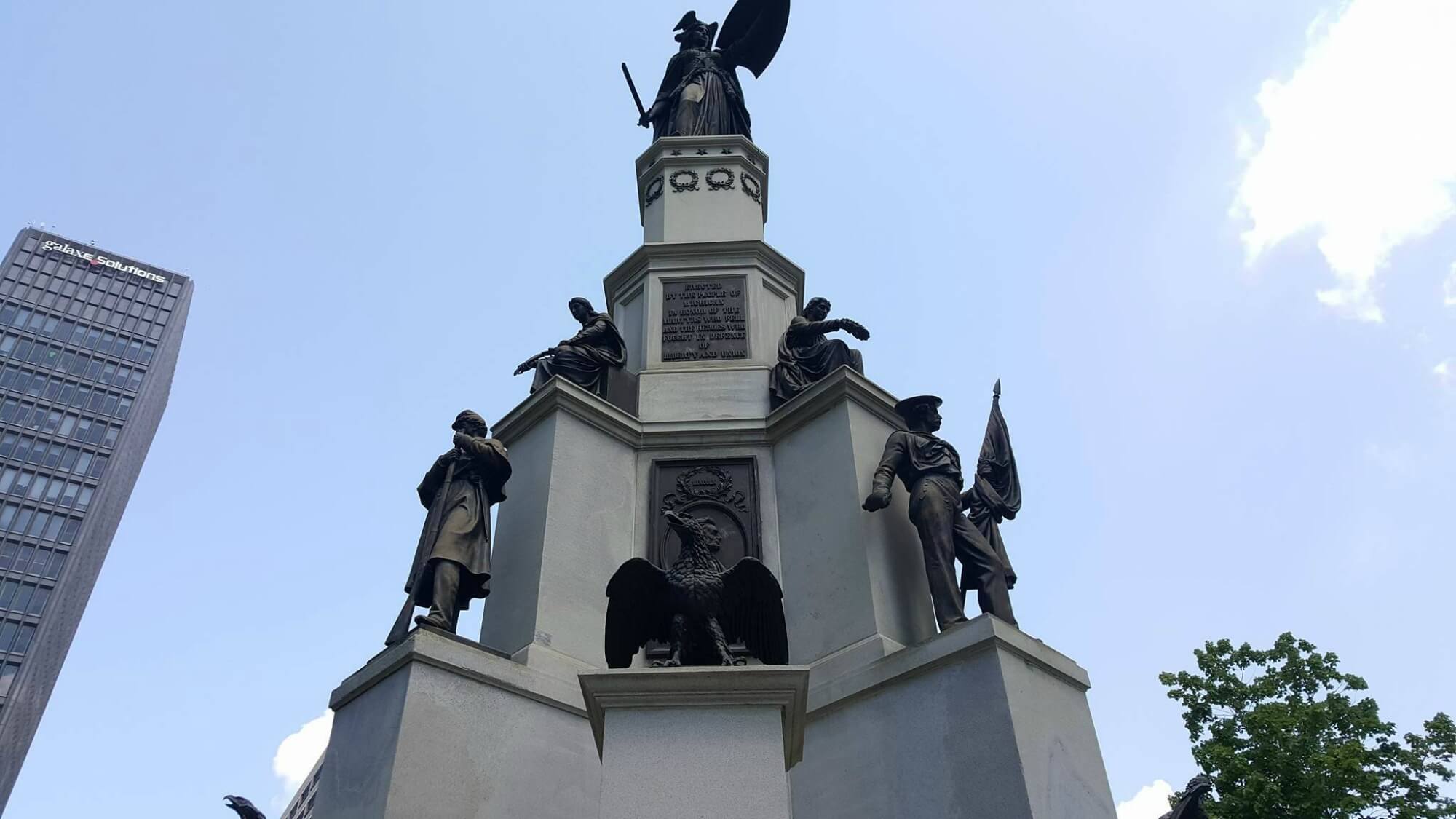 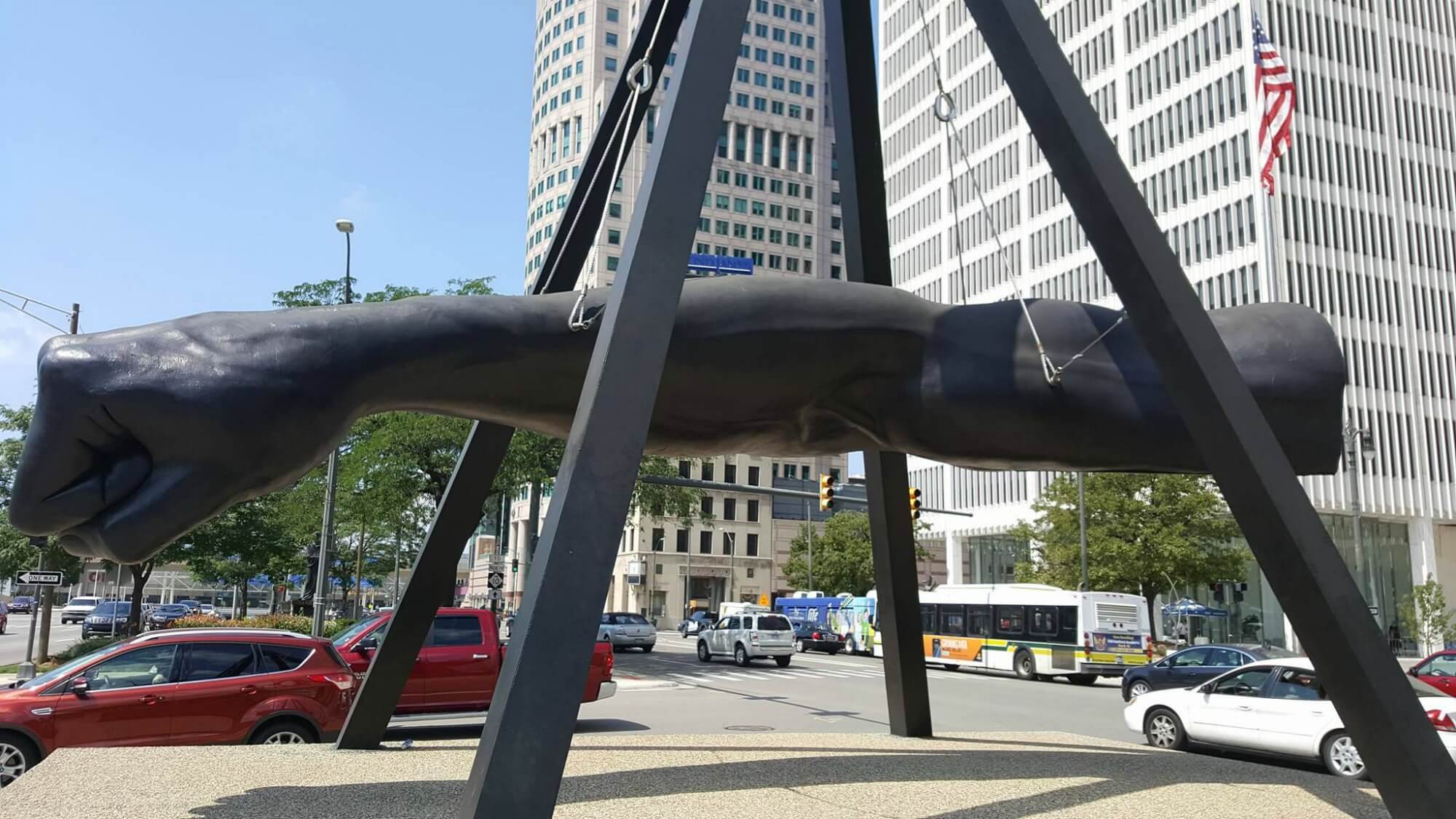 In the winter months, Campus Martius Park turns into a winter wonderland with an Ice Rink, and special exhibitions. During the holiday period a 60-foot Christmas tree is the main attraction. Campus Martius Park and Cadillac Square are popular spots in downtown Detroit for both tourists and locals so be sure to check it out if your ever in the area.

The next stop was the Detroit River. On the walk down, we came along the Spirit of Detroit Statue where people were taking photos, many mimicking the position of the Statue. Statues seem to be the most photographed areas in cities, so it is interesting to see what each cities statues look like. The Spirit of Detroit is definitely one to add to the list.

The Detroit River marks a section of the border between America and Canada, with many boats and tours to choose from. The Detroit Princess was parked up alongside the river’s edge. This boat is a 4 story cruise boat that is available for parties or sunset cruises. We were content with walking along the broad walk in the stunning weather mother nature had put on for us.

We could see the GM building in the distance as we walked in the beautiful breeze coming off the river. The GM building is massive, with two food courts, a GM showroom and many different levels with offices. Unfortunately for us the showroom was under construction. The building seemed so out of place to me. It seemed like something that should have been in Florida yet it was situated right here in Detroit. 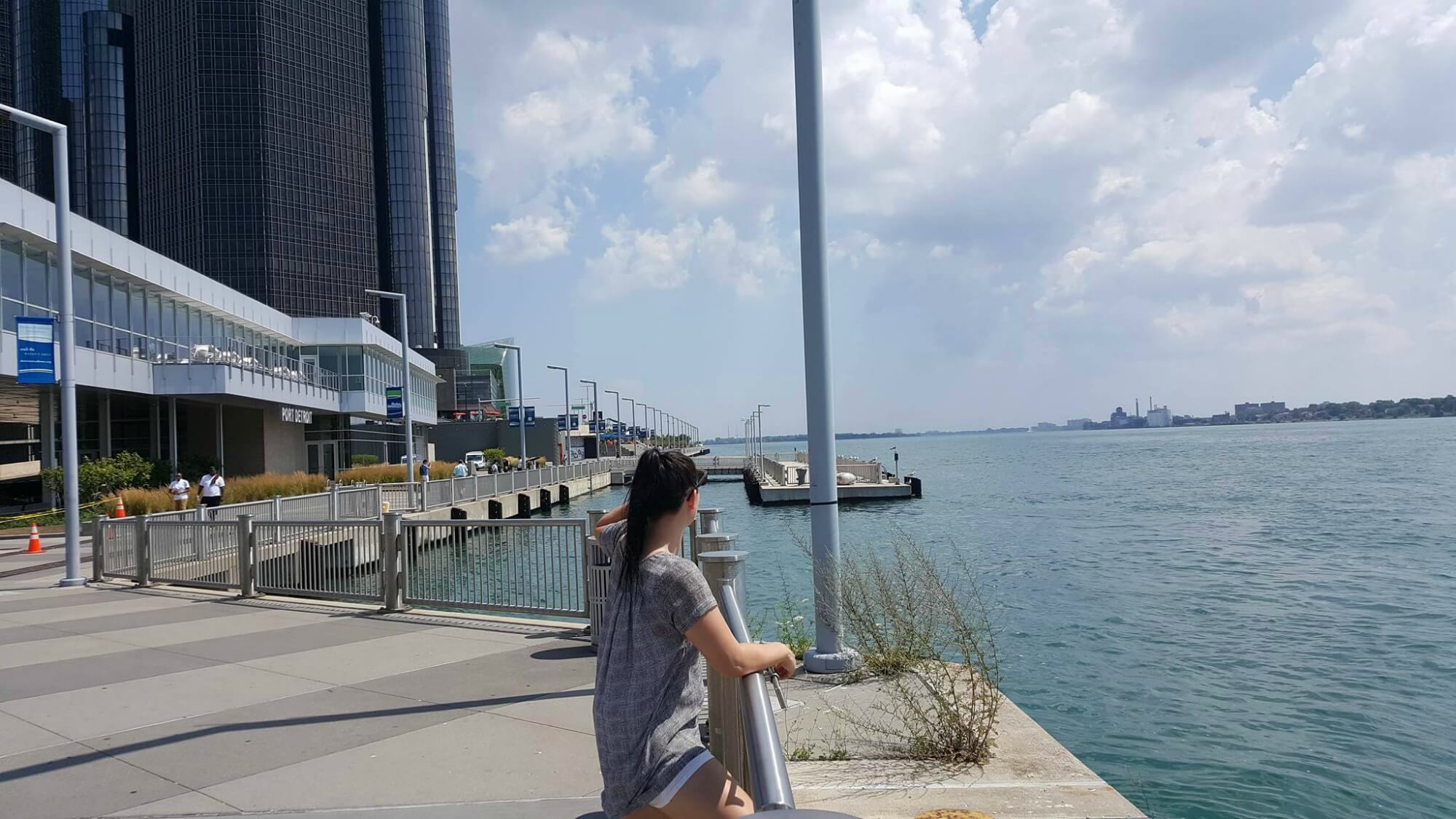 Not quite what we expected

Once we explored that for an hour or so we headed back into the downtown area. We found a restaurant to chill out in and have a few celebratory drinks for the afternoon.

I talked with the waiter, asking him about the ‘rough’ areas of the city and if it was possible to go and drive around them. He laughed and said ‘there are places in this city you will not get out alive’. He even put emphasis on the fact that if you went to those parts of town there are police that will escort you back out.

So my preconceived idea was true, but not on the scale I thought. In fact I was not even close, Detroit completely blew me away. I really enjoyed the city and would highly recommend anyone in the area to check it out.

For more insight into the city and the activities you can do check out; https://visitdetroit.com/ 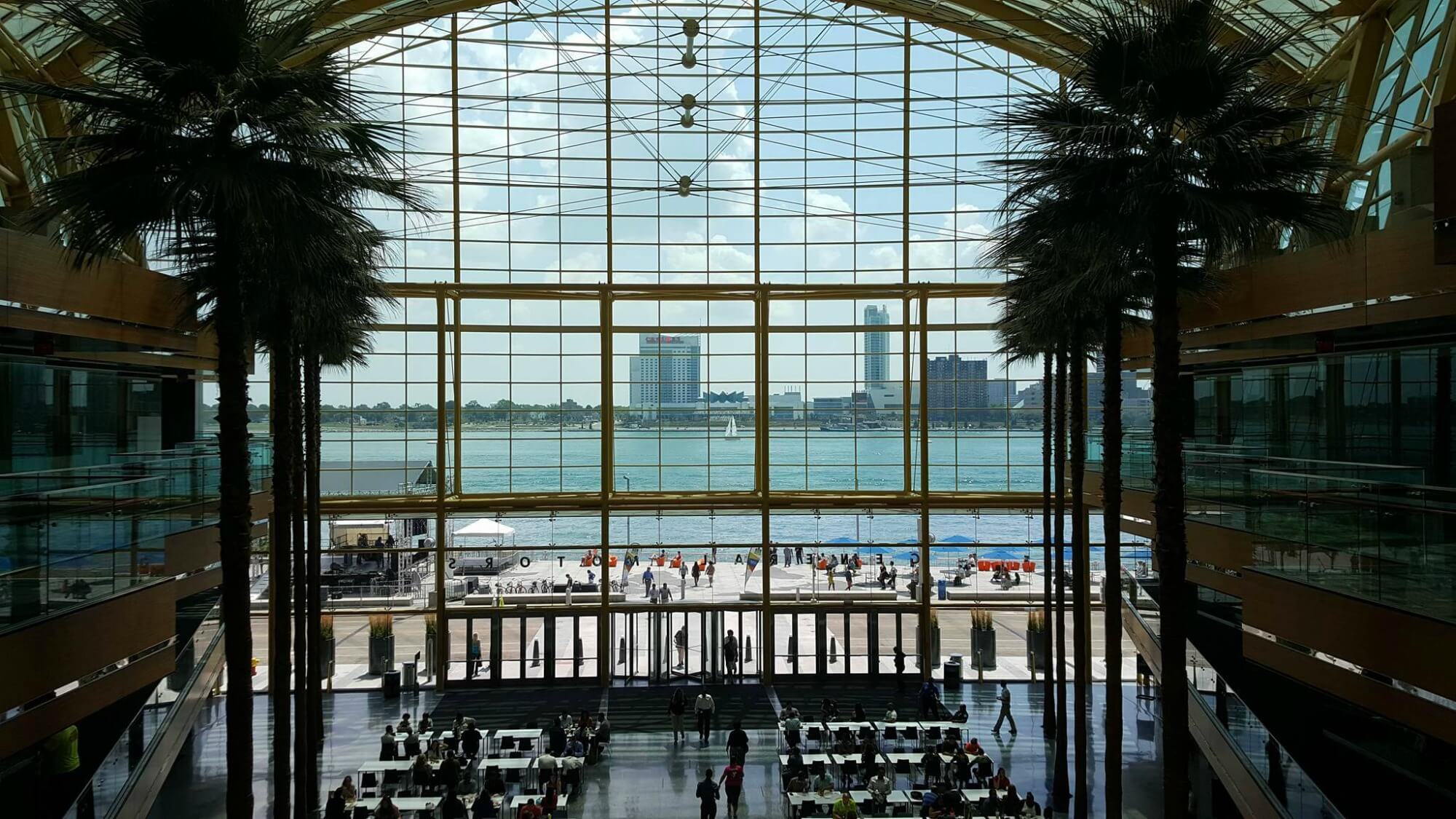