The city of Chicago in the State of Illinois is the third largest city in the United States. Growing rapidly through the mid-nineteenth century, the city is now an international hub for finance, commerce, industry, technology, telecommunications and transportation. Chicago built the first steel-framed high-rise building in the world. Therefore, Chicago’s skyline is among the world’s tallest and most dense in today`s era. Chicago is a city well know for its diverse culture, prominence of the arts and sports, and it’s excellence in schooling.

Arriving in Chicago from Minneapolis, I knew we were going to have an awesome time exploring the city and all it had to offer.

Freehand Chicago hotel was our accommodations for our stay and we couldn’t have chosen a better place! Housed in a classic 1927 building, Freehand is funky and quirky with an amazing relaxed vibe and beautifully designed spaces. 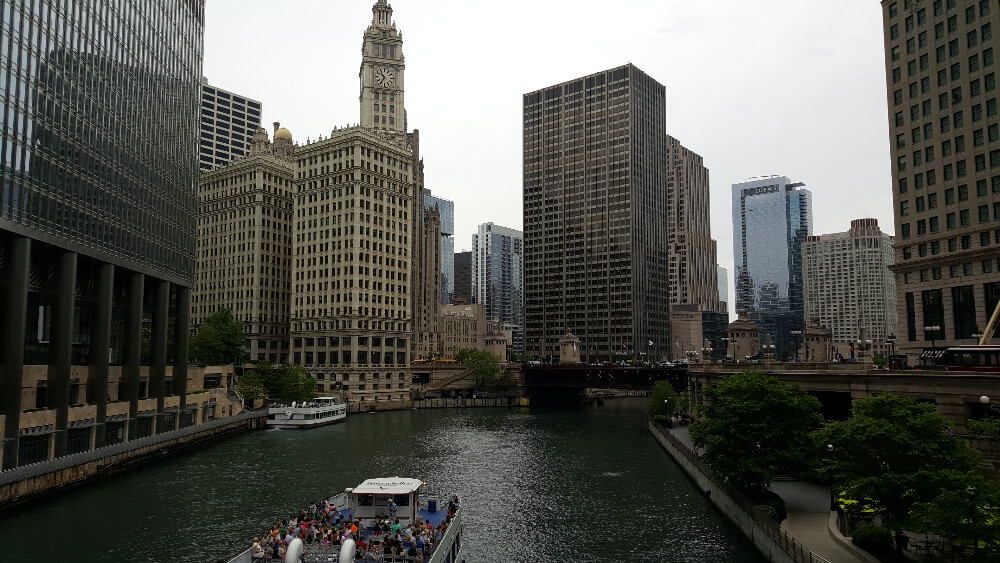 Offering both private and shared accommodations this hotel/hostel gives visitors to Chicago a comfortable and relaxing stay. Café Integral offers freshly ground Nicaraguan coffee, while The Broken Shaker bar offers brilliantly made cocktails and bar snacks. There is also a communal kitchen available for guests downstairs. Freehand offers so much for their guests with planned outings and activities to take part in or other suggestions for checking out the city.

Definitely recommend this amazing Hotel if you are visiting Chicago. They even have a second hotel in Miami for those down south. 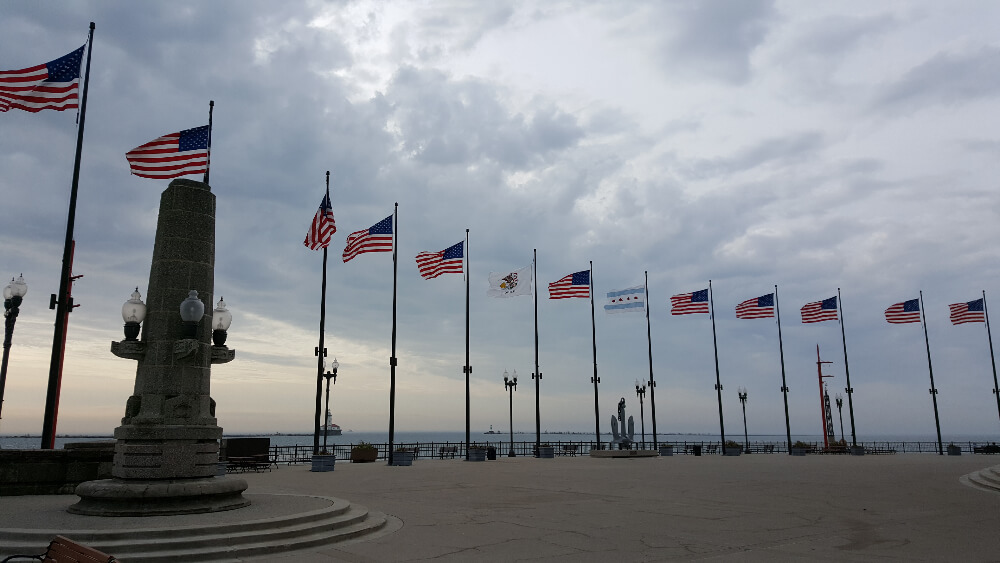 Navy Pier is Chicago’s number one tourist attraction. The Pier consists of more than 1 km of mixed-use retail, dining, entertainment and cultural events. The Pier got its name in 1927 to honour the naval veterans who served in the First World War. Being the centennial year for the Navy Pier, a new Ferris wheel had just been installed and opened when we arrived.

During our time in Chicago it was Memorial Day. We even managed to catch a bit of the Memorial parade making it’s way through the streets. Memorial day is a federal holiday in America for remembering the people who died while serving in the country’s armed forces. It is a time for many Americans to remember those who are now gone. Parades happen in many cities and towns with graves being decorated to commemorate.

Chicago has the second oldest settlement of Chinese in America which formed around 1915, and the area named Chinatown. This neighbourhood is located in the south side of Chicago. Deciding to check it out one night we took the train and had a look around. Getting dinner at one of the restaurants was delicious and a bit different. Choosing our meats and vegetables we cooked everything at the table in a massive bowl of flavoured broth. 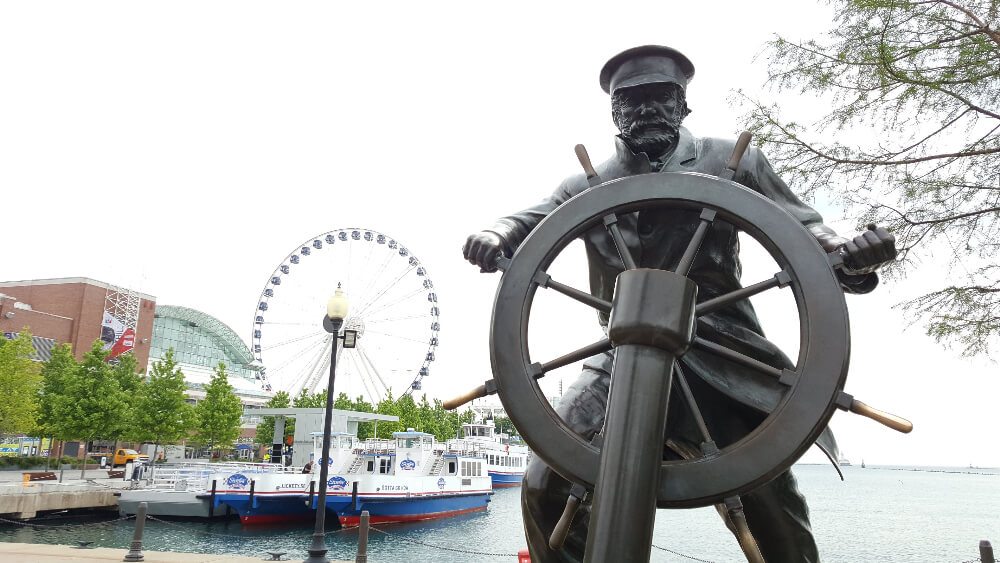 Chicago has a plethora of restaurants with plenty of different cuisines. Our favourite place had to be Eataly, which conveniently was only 100 metres from our hotel. This food emporium includes a nutella bar, a pizzeria, a mozzarella ‘lab’, and a brewpub. There is also a gelato bar, and two cafes plus all the classic Italian food and wine possible. Knowing we wanted to check out the brewpub we headed there first and was amazed at the selection of beers available. We could look around after a drink! So we were very surprised to see that you can buy a drink and then going shopping while your drinking it! Overall, the place was amazing and it was easy to see why it was so popular.

Being in Chicago we knew we had to try the famous deep dish pizza. With a number of pizzerias in the area we settled on one and ordered. Having an upside down effect the sauce is at the top, the cheese is at the bottom with all the other toppings in the middle. Being more like a pie, it is a very different take on pizza but was really delicious. 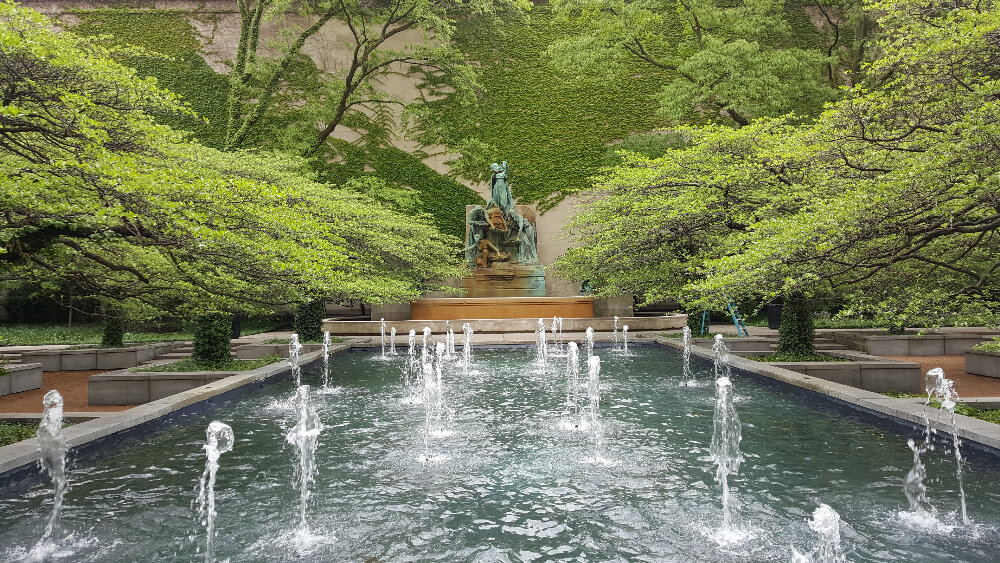 Chicago is famous for its outdoor public art. The cities motto is Urbs in Horto, a Latin phrase which means “City in a Garden”. Today Chicago has more than 570 parks with more than 700 works of art. Visiting quite a few of them in our time there was an adventure.

Buckingham Fountain was built in 1927 to honour Clarence Buckingham. Clarence was a former trustee and benefactor of the Art Institute of Chicago. This is now a well known attraction for tourists to the city.

Guarding the entrance to the Art Institute of Chicago is two bronzed lions that have been there for over 110 years. 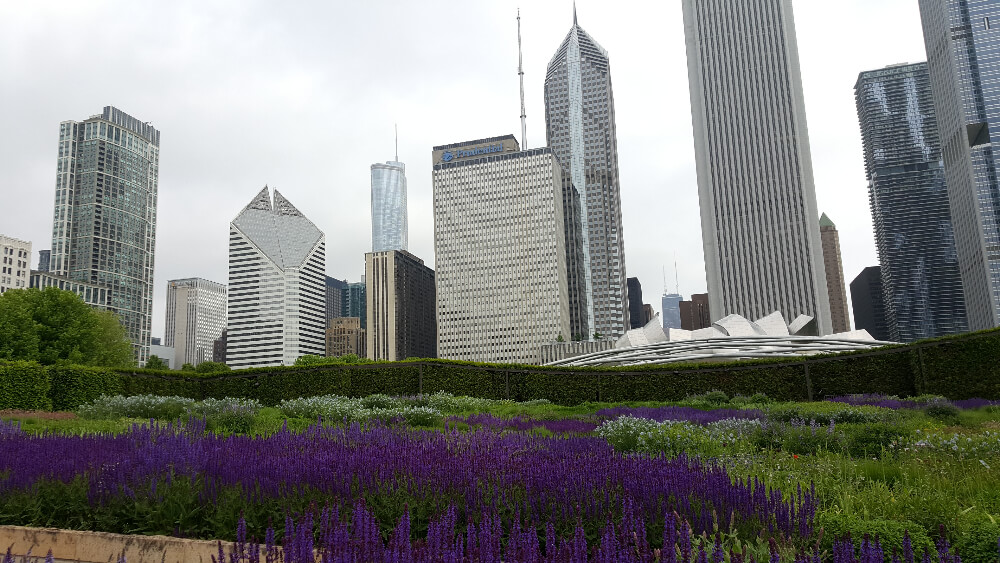 Millennium Park is a 24.5 acre cultural and entertainment destination for year round attractions and programs for its visitors. One of the most well known Chicago sculptures resides in Millennium Park. That is the Cloud Gate (sometimes called the bean by tourists). Weighing over 110 tons, Cloud Gate is one of the world’s largest outdoor sculpture installations. It is made of stainless steel which can expand and contract in response to changes in temperature. This also gives the sculpture its bright shine and mirrored effect.

The Crown Fountain is an interactive fountain where water cascades down the facades of two 50 foot high glass brick towers. The towers display the faces of 1000 Chicago residents. When a face is displayed there is a water outlet that spouts right where the mouth is. In warmer months people can be found playing in the water between the two towers.

Visiting Chicago was an amazing experience for our first visit into America. It was easy to see a lot of the city in a short time so I recommend anyone heading that way to stop in. 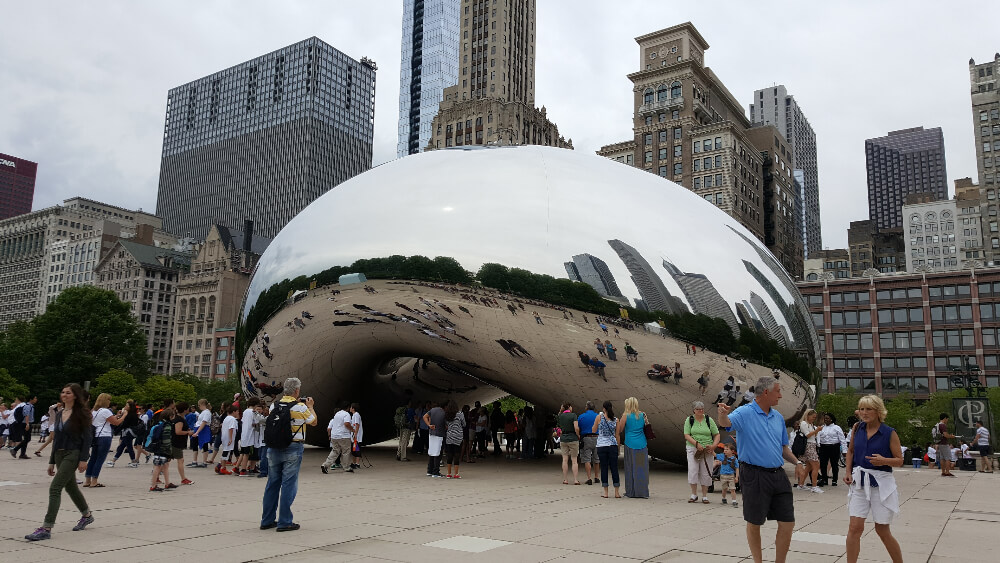